The big news in my life recently is that Rach and I have bought a puppy. She’s a 4-month-old French Bulldog named Amber, and she’s gorgeous. Before this little, furry bundle of joy came into our lives though, we had to get our doggy fix by heading down to Broadway Market on a Saturday morning and marvel at the array of Frenchies, Pugs and Pomeranians on leashes weaving through the crowds of trendy East Londoners sampling the wide variety of market food fare. Now, don’t get me wrong, Broadway Market has a lot going for it aside from the dogs. Stalls selling a menagerie of different cuisines of street food – anything from Malaysian curries to veggie scotch eggs – leave me with my mouth watering every time I head there on a Saturday afternoon. Up until recently though, there was a stall that stood out but that I hadn’t sampled. The Veggie Table, serving up a simple menu of two kinds of veggie burgers, always appealed to me, but most of the time I visit broadway market, it is in search of a midmorning snack. This time I was in search of lunch so there would be no bypassing it on this occasion. 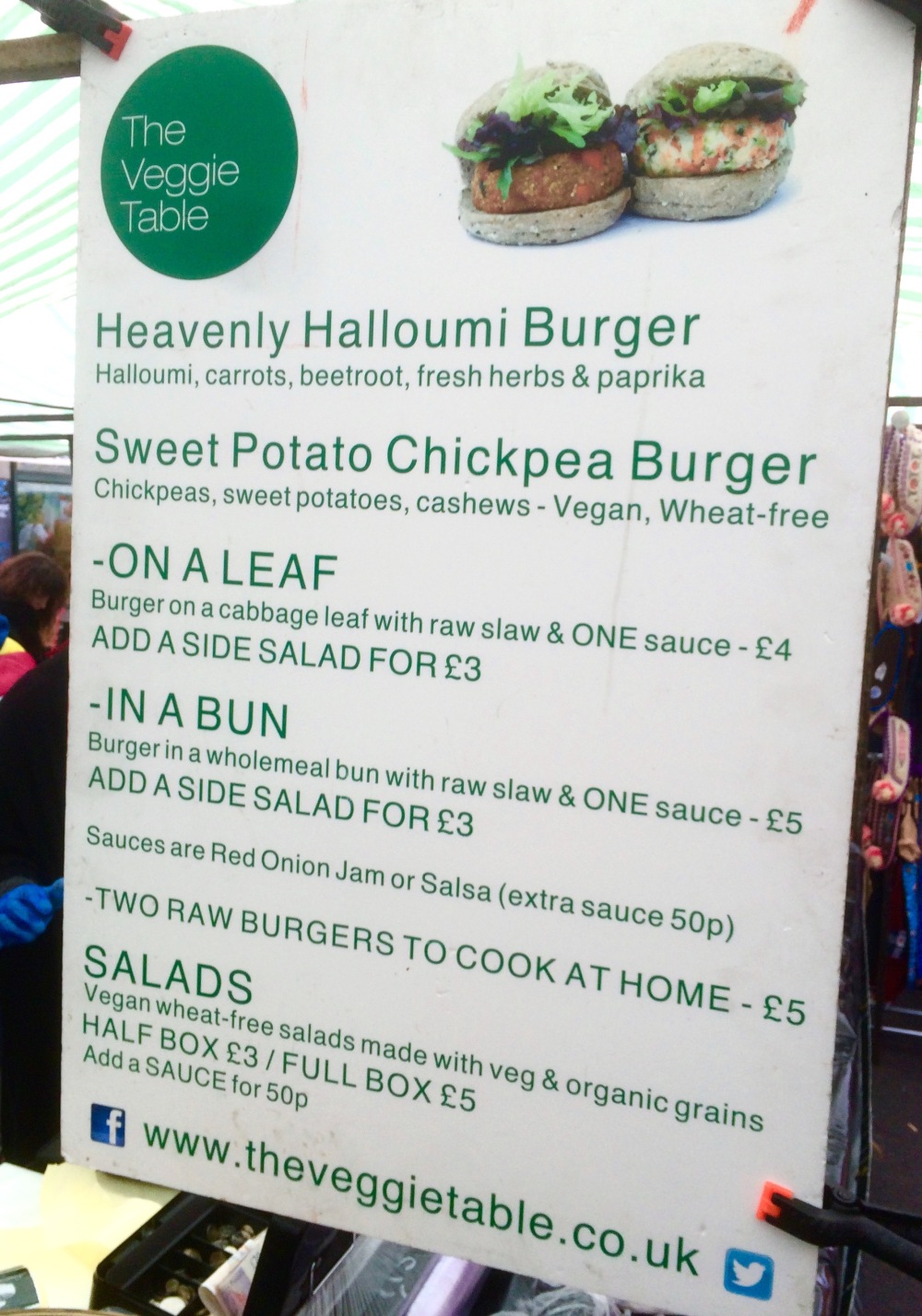 The two burgers The Veggie Table has on offer are the ‘Heavenly Halloumi Burger’ and the vegan ‘Sweet Potato Chickpea Burger’, both of which you can either have in a wholemeal bun or ‘On a leaf’ (for the carb-conscious). The only side on offer is a mixed salad. Even though the simple menu seemingly made my decision easier, it was still one more option than I’m used too so I read what the queue in front of me was going with and went for the Heavenly Halloumi, and – based on the advice given to me by the helpful staff – I went for extra toppings of onion jam and salsa. Because it was only £3 extra, and I was feeling inspired by this healthy burger experience – I decided to go with the side salad too. 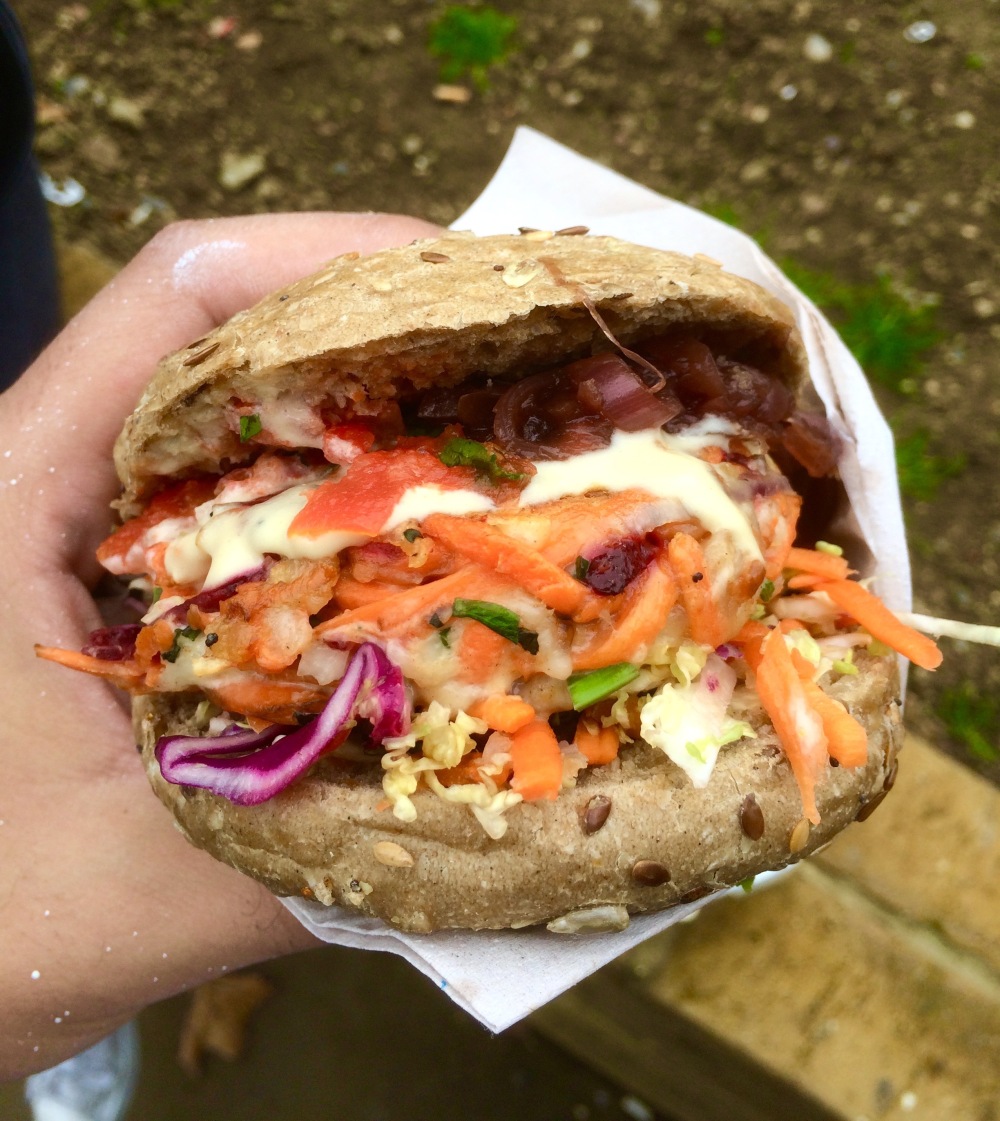 The burger itself was joyfully fresh, full of crunchy veggies in both the patty – carrot and beetroot – and the salad inside the bun. The patty was flavoursome, the saltiness of the halloumi balancing the earthy flavours surrounding it. The sweetness of the red onion jam and the spiciness of the salsa complemented each-other and meant that not one tastebud on my tongue was left out. The seeded, wholemeal bun was a interesting switch-up to the usual brioche or sesame bun and worked perfectly with the healthy, crisp nature of the burger. The salad on the other hand was ok – two of the three salads in one form or another were incorporated in the burger – and could could probably have been missed. 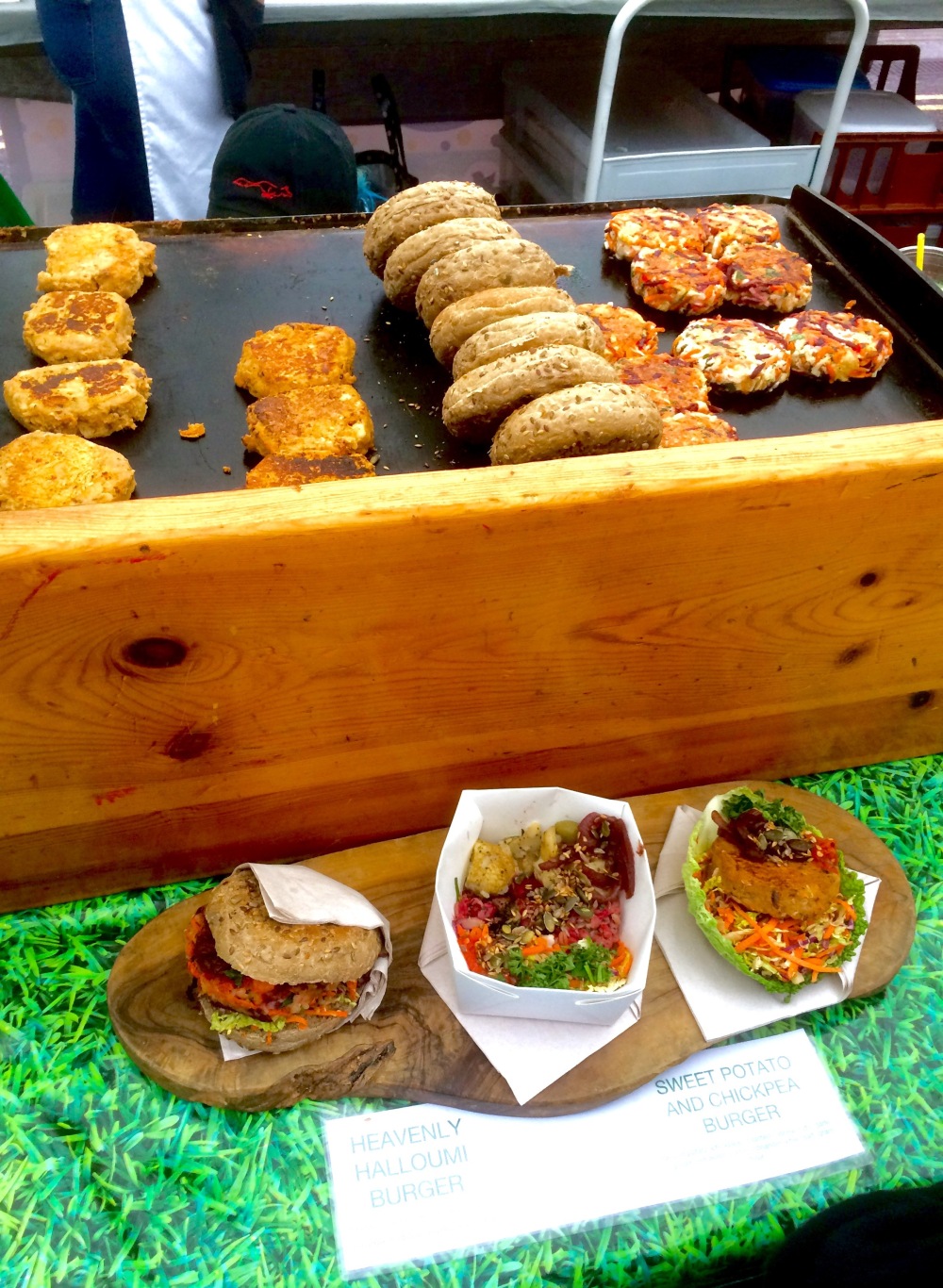 The Veggie Table is a great place to grab a veggie burger on a Saturday lunchtime. Now with one more reason to grab a bite to eat and sit on the wall by the mouth of London Fields, this time with my own dog, there’s plenty of reasons to stop by. In amongst the stalls selling a wide variety of artisanal foodstuffs they rightly take their place in the market and I will be sure to stop off there again some weekend in the future.