Every single week it seems a new outdoor food market pops up somewhere in London. It’s a sign of London’s insatiable appetite, both literally and figuratively, for food that these markets are attended so consistently. One thing I tend to notice about these places, however, is that their is a distinct lack of veggie burgers. Don’t get me wrong, the vegetarian options across any given food market will often outshine the selection of any restaurant, but when it comes to the burger vans their is a distinct lack thereof. One such market that isn’t lacking in this department is Pump Shoreditch. It’s located where the old petrol station used to be – hence the name. Amongst all the stalls serving a plethora of world cuisine is Essential Vegan, serving – you guessed it – vegan burgers! 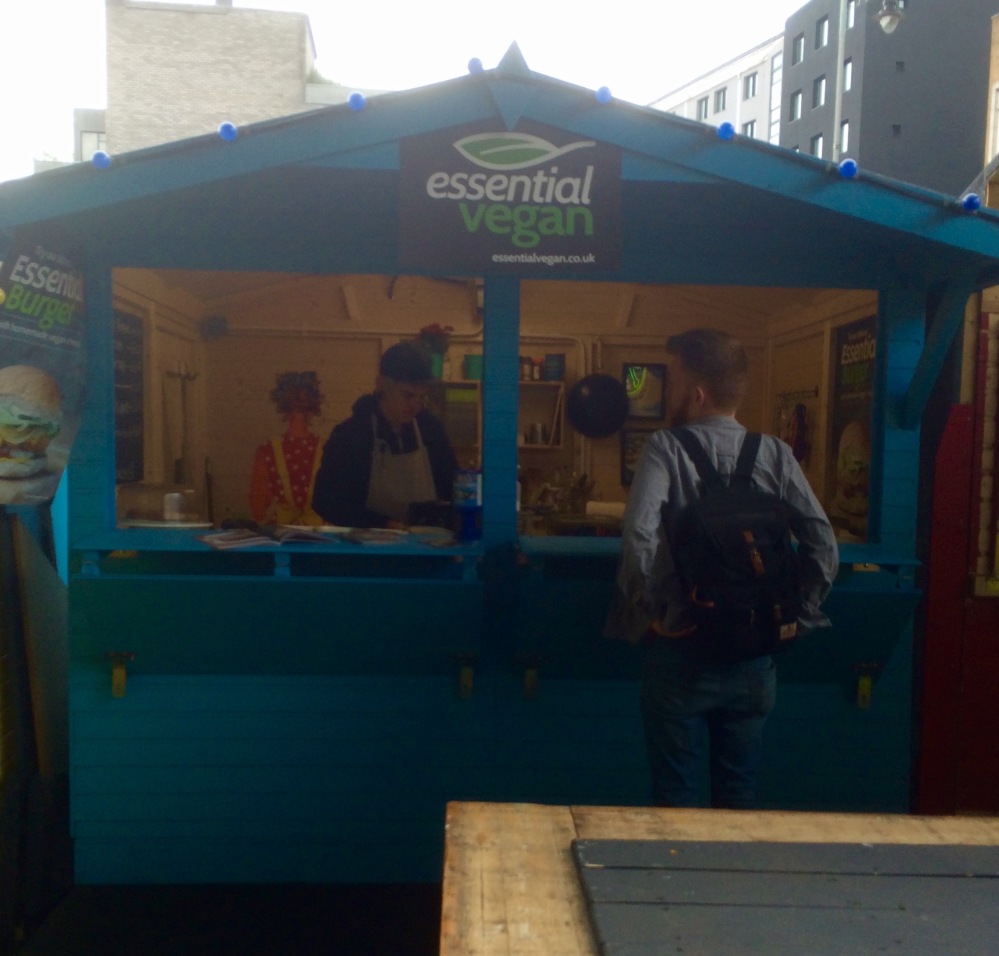 Now I don’t go out of my way to often to eat vegan, especially when it comes to burgers. Coincidentally, two out of the three burgers I ate at Glastonbury were vegan – but that’s just the vibe. Intrigued, I asked the guy serving me about what was going into my meal to help me through my experience; The patty, was gluten based, rather than soya. This, I was informed, was to give it a more meaty texture. It was served on a bed of almond milk vegan cheese which resembled thick honey spread on the base, and then was topped with a shop bought vegan mayo, as well as ketchup and mustard, all served with some lettuce inside a wholemeal bun. The experience was a bit strange, I have to say. The texture was, as described, meaty, but the flavour was all a bit confused. I feel that the need to put all the sauces in the bun was making up for something, because it seemed to be lacking a bit, it wasn’t particularly visually appealing either. It filled a hole at least.

One thing I took from the burger at Essential Vegan was that it was trying to be something it wasn’t. One thing I feel veggie or, for that fact, vegan burgers don’t need to be is a meat substitute, and as this burger was described to me as being more meaty from the offset I was already dubious. Add the vegan ‘cheese’ and the egg-free mayo, and you have a whole lot of false things going on. A vegetable patty, served with salad and ketchup is equally as vegan, and probably a lot more tasty – what’s wrong with that? It might sound a bit hypocritical coming from a writer of a veggie burger blog but vegetarianism and being vegan doesn’t need to be an imitation of meat eating, it should be something wholly unique. So, whilst I was happy that I finally found a veggie burger van in a pop up market, I feel like my search is far from over.