Around Christmas time one’s appetite gets a little bit out of hand. The endless Christmas dinners, the ridiculous amount of boozing, and the general increase in the consumption of all things sweet, all add up to one big festive period of gluttony. With a friend coming to Town for our annual Christmas get together I thought I’d add my own touch to this yuletide gorging by having two burgers in the same day. The first burger I had was my Obama-dedicated burger at Kua Aina, the second – and originally the only one I had planned for the day – was at Tommi’s Burger Joint on Thayer street in Marylebone. 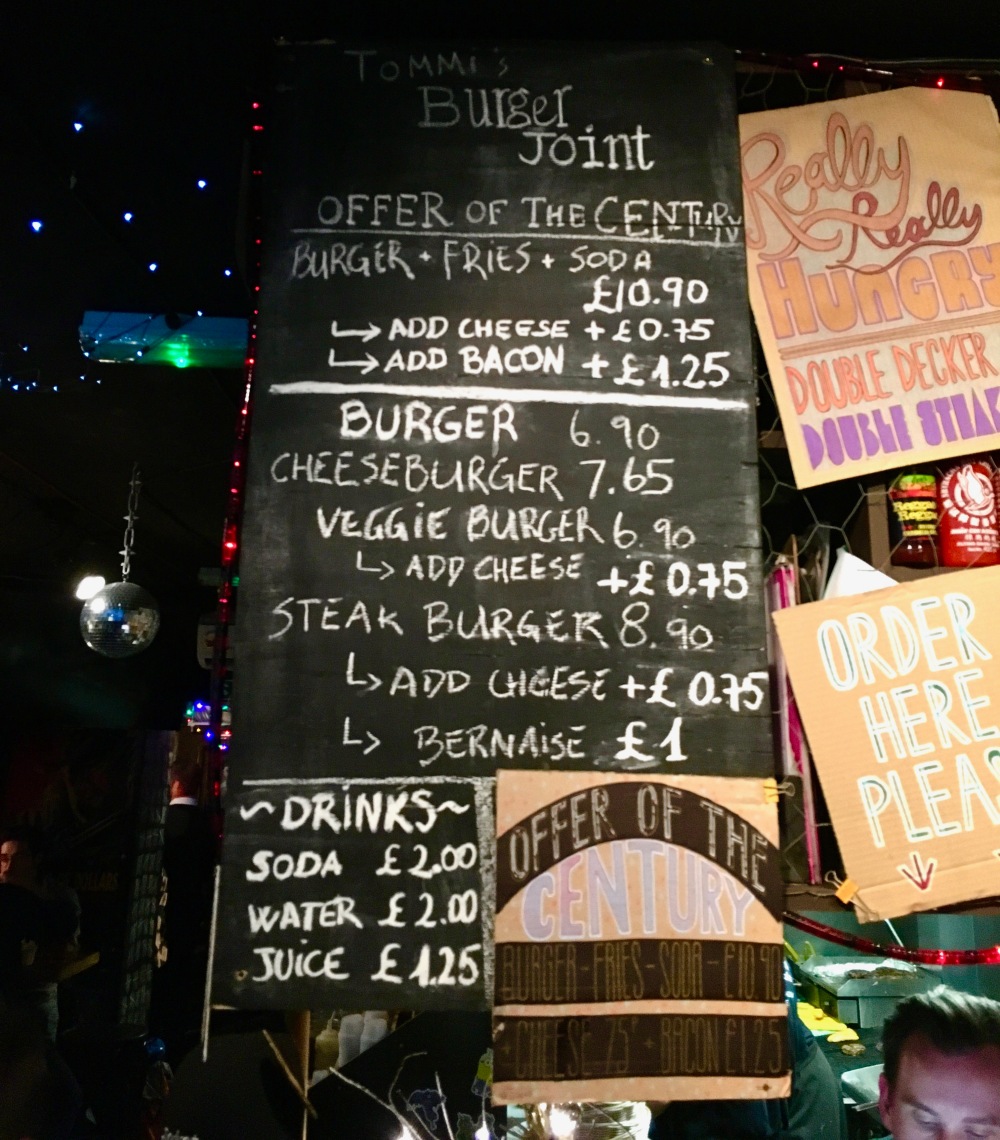 I had been to the Burger Joint a few year’s back in my pre-blogging days and was enamoured by it’s no nonsense approach to serving up burgers. The location had changed since the last visit, but the feel was still the same. As you walk in there is a small queue of patrons ready to order at the till off the black board above. The menu is simple, with four burgers on offer, one veggie, which I duly went for as part of the ‘Offer of the Weekend’ (a special version of their ‘Offer of the Century’). A deal which includes burger, fries, and a bottle of Camden beer – all for £12.90. The trend is continued as you go to sit down, most of the seating is on industrial looking bar and stool set ups. It being a Friday night it was pretty full, with people sitting outside even in December, but my group of mates managed to find a 4 seater all to ourselves. One thing that Tommi’s does put a bit of fuss into though was the condiment bar. Right next to the collection point is a set of what must be well over thirty sauces and and extra burger fillings, which I rightly got stuck into in preparation of my burger.

When the burger arrived (preceded by a ‘This is a veggie one yeah… just checking’ – people often assume me as non-vegetarian), it was as I remembered both proportion and flavour wise. The patty is veggie based, crispy and a bit spicy, inside a brioche bun with the standard fillings, and holds together pretty well. The additional cheese I got with it when I ordered was needed for my taste, as well as some gherkins which I got from the condiments counter. I couldn’t complain with the chips and the Camden Hells was as inoffensive as the rest of the meal.

But that’s just the thing, whilst the no frills approach may appeal to eaters of beef, a veggie burger sometimes needs a bit innovation to separate itself from the norm. The burger was good, yes. But as I write this there is no overwhelming memory or emotion that I can recall from eating my burger. The place is cool, don’t get me wrong. Everything from the tunes playing, to the boardgames on offer, to the bearded, tattooed Icelandic burger chefs, makes it fun place to eat a burger on Friday night. All it needs is a slightly better veggie burger. Maybe I’ll leave it to one burger in a day the next time I consider doubling up.

Is two burgers in a day too much? Asking for a friend…