Back in the LDN and in search once more of a proper burger so I decided to head to one of the stalwarts of the burger game – Gourmet Burger Kitchen. GBK has been around for as long as I remember and their name is synonymous with the success of UK burger restaurants. Boasting over 60 restaurants across the UK (with a fair few of those in London) I found myself at the branch in the O2. There is a sense amongst the burger going folk that although GBK has been around since the beginning, it has been left behind by the new wave of tastier, trendier burgers on the scene. I had to see whether that was the case with the veggie burger.

The menu strikes you as different from the norm just due to the sheer number of options on the menu. The vegetarian section boasts four different burgers with three different base fillings, but when you take into account that you can switch out any meat patty from any of the other options with a pan fried bean patty then the amount of veggie options increases four-fold. I went for the Californian, the slightly more alternative option of the two bean-patty choices in the veggie section, along with the fries, the blue-cheese ‘slaw and a coke.

The burger at first glimpse looked pretty impressive. A neat-looking, bean patty topped with cheese and smashed avocado – as well as all the usual trimmings – in a toasted sesame bun. The first bite gives the biggest impression of the burger and, unfortunately for this one, my first impression was one of dryness. Even the avocado and the smoked chili mayo failed to add any real moisture, with the cheese not even melted. On the flip-side, the real killer ingredient was the house relish that packed the most punch of the whole meal, and really was the most enjoyable thing in the burger itself. The fries were delightfully thin, and vindicated my decision not to get my usual favourite sweet potato fries, but the ‘slaw just wasn’t cheesy enough. 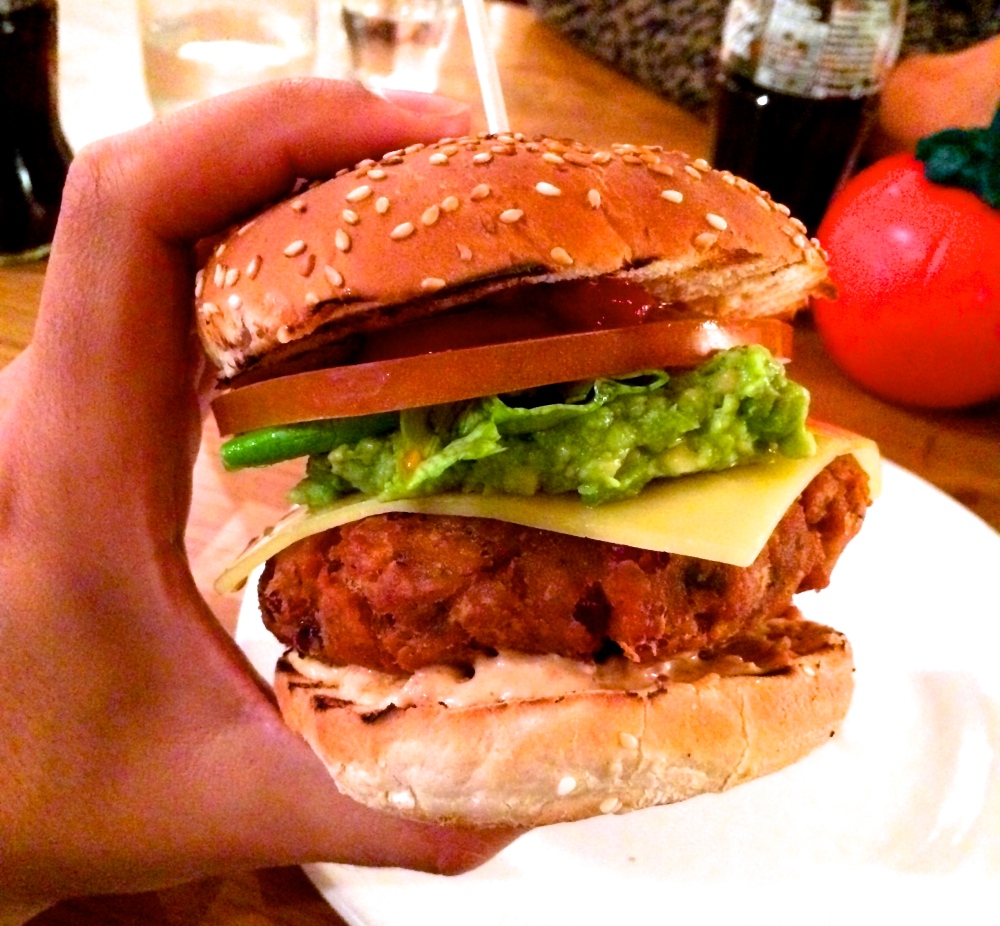 The trouble with GBK seems to me that they are going off their outdated reputation alone. It is down to the fact that they have been around the longest, and are the most visible burger chain on the high street, that they can keep going. What this means, however, is that there is an inkling of a reluctance to remain fresh and keep up with the times. The way you have to order and pay up-front at the counter in such a big restaurant with so many staff seems like an old gimmick – and means that ultimately the friendly and helpful staff will often miss out on tips. Also, to use the example of the bean patty (the veggie patty that they offer to swap in in every other combination), to serving something so dry for your main veggie burger when you’ve been around for the best part of 15 years shows that there’s very little being thought about and updated in the kitchen. I can’t speak for the beef or chicken burgers but in these times when burger restaurants are a dime-a-dozen you need to evolve or become extinct.