Ok, I know what you’re thinking, this blog has taken a nosedive. Reviewing McDonald’s what’s he doing?? Yes, McDonald’s is not part of the burger revolution that our great capital is currently in the wave of, and yes, unless you’re feeling drunk, hungover, sorry for yourself, or skint you probably wouldn’t end up in Maccy’s for dinner, but this is a travel post! I was not in London, and not having dinner, but merely partaking in a cultural exercise where different cultures and cuisines clashed to make something potentially beautiful – I went to McDonald’s in India! 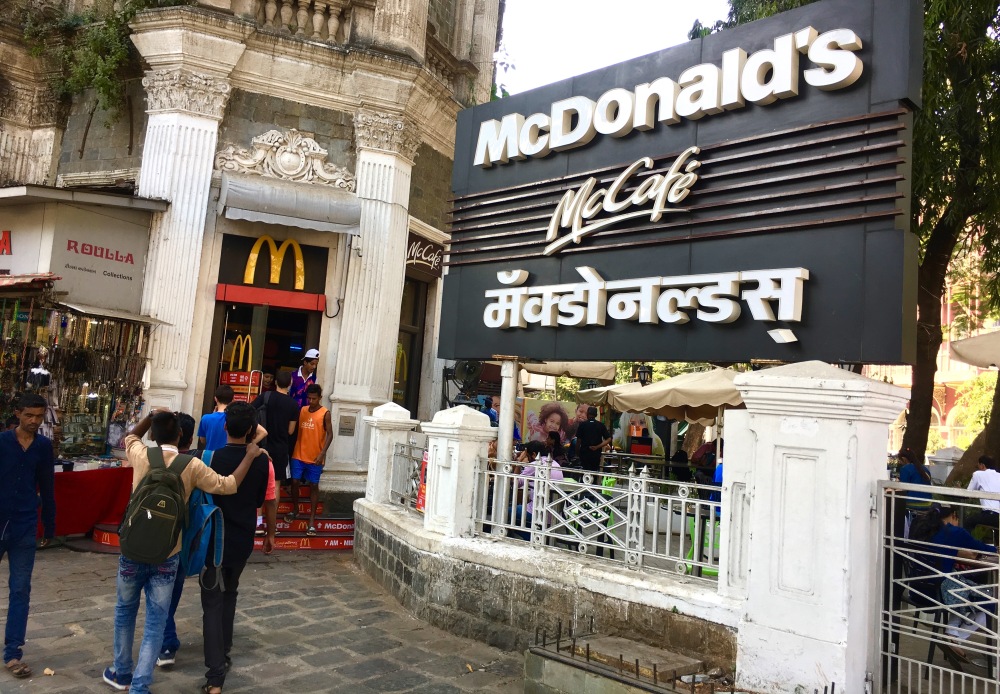 Before I went to India I was excited more that usual, mainly due to my expectations of the vegetarian cuisine. In terms of vegetarianism, India really is the Holy Grail. With nearly half of the population – 500 million people –  vegetarian, and the majority of the rest not eating beef or pork, the likelihood was that more than anywhere I had ever been before in my life, India was going to be the place with the biggest and tastiest selection of vegetarian dishes for me to sample. But would this be the case across the board? Just after landing in Mumbai, I spotted a Burger King across the road from the main terminal building advertising it’s chicken-whopper, which posed the question: how do international fast-food beef burger brands adapt to such a veggie heavy market?

It certainly wasn’t as easy to find an Indian McDonald’s in India as it is in London, surprisingly even in the downtown of a megalopolis like Mumbai. The branch in the the tourist area of Colaba (an area famous to most for being the setting for much of Gregory David Roberts’ epic Shantaram) was closed for refurbishment. Aside from that there was only one other branch in the south tip of the Mumbai peninsula, and that was opposite the majestic Chhatrapati Shivaji Terminus building, which meant that we didn’t have to go too far out of the way on our day of sightseeing (one would argue that this was a sight in itself…). One thing you realise as you walk into a branch of McDonald’s in India is that the clientele is very different to what you would find over here. There were a lot of families, true, but also quite a big crowd of young professionals, and older middle class customers too. The biggest difference, as expected, was the menu! Of the eleven burgers on offer, a massive five were vegetarian (with the other six comprising of five chicken burgers and one fish burger), with even more veggie options available in the form of wraps. The best thing, though, were the names. Conspicuous in it’s absence was the Big Mac. The main burger that took it’s place was the brilliantly titled Maharaja Mac, available in both veg and chicken. Also available was the McSpicy Paneer, the McVeggie, and lastly – from the saver menu – the Aloo Tikki (40p). To try and sample as much as I could, I split a Maharaja Mac and a McSpicy Paneer with my mate, and got a McAloo on the side. 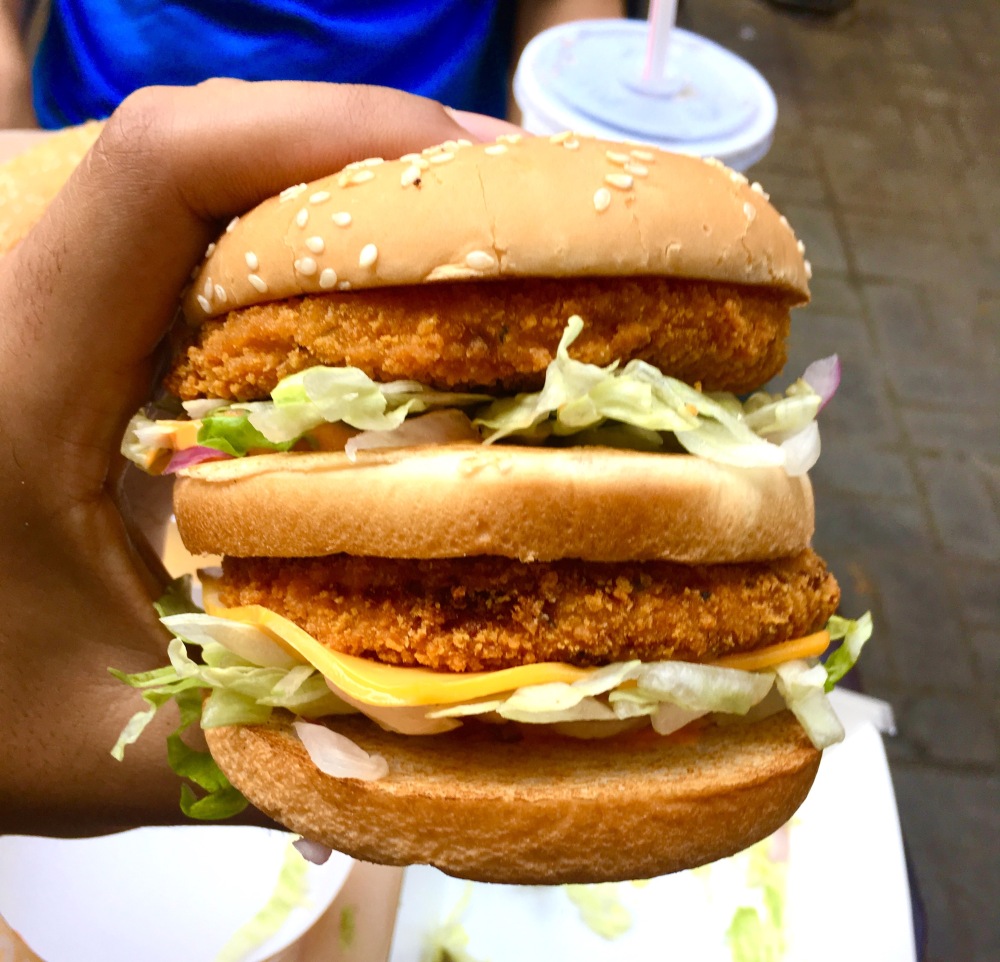 Unfortunately, this is where the romance with the Indian McDonald’s started to fade. After getting past the momentous moment of having my first ever doubled tier burger, the two patties in the Maharaja Mac were very run-of-the-mill. The McAloo Tikki – a potato and pea burger designed to get in new customers with its cost, and by supposedly replicating the flavours you would get in typical Indian street food – was pretty flavourless reflecting it’s cost. Even the McSpicy Paneer (essentially a deep fried battered slab of cheese) wasn’t even spicy! 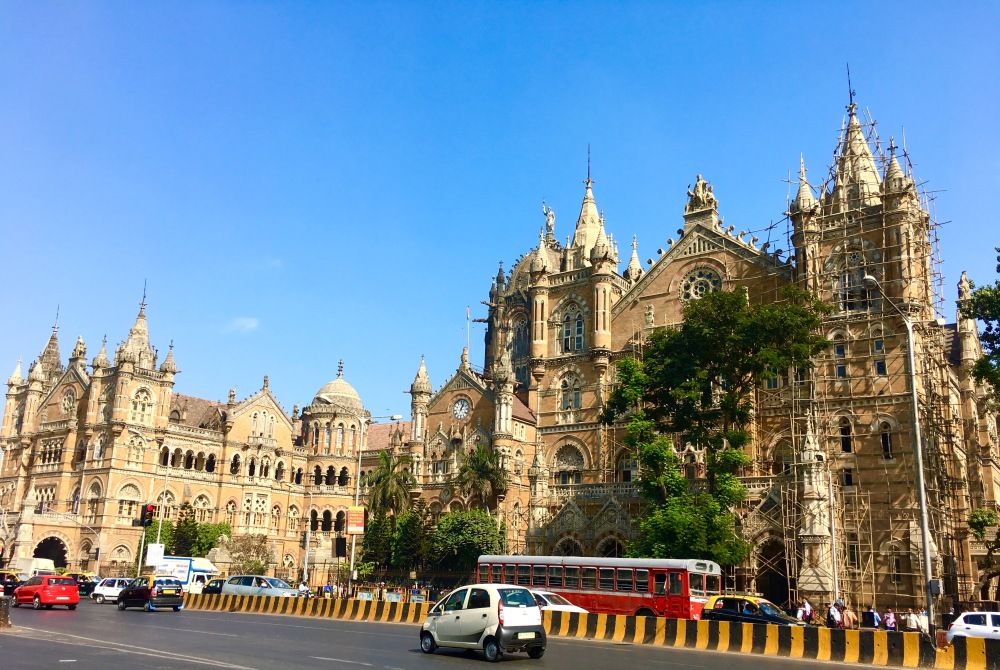 Whilst the burgers disappointed, for the entire fortnight preceding my trip to McDonald’s my tastebuds were tantalised by an array of curries, dosas, and thalis of such variety and flavour that I could’ve happily eaten for the rest of my life. It was a shame that this wonderful Indian ability to spice and flavour their food had been lost – or at least dialled back a considerable deal – when it came to this collision of worlds. The lunch at McDonald’s was hands down the worst meal I had in the whole of India, but I don’t regret trying it one bit. For one, it gave an almost immediate comparison to the food I was eating whilst in India, allowing me to appreciate it even more, and secondly, it gave a glimpse (perhaps only in Beta mode) into some sort of utopian future where international fast-food conglomerates have to bow to the pressure of a majority vegetarian population. Hey, we can all dream, right?