My brother is in town for a few days, down from his first term in uni up at Leeds, so I decided to kill two birds with one stone by catching up with him over a burger. I was looking forward to visiting Dirty Burger because it seems like a place that carries a no-frills vibe about it, but still presumably puts a lot of thought into their short-but-sweet food menu. The restaurant itself, just across the road form Boxpark by Shoreditch High Street station, is more of a take-away spot but they do have a bar running along the outside of the restaurant where you can sit. 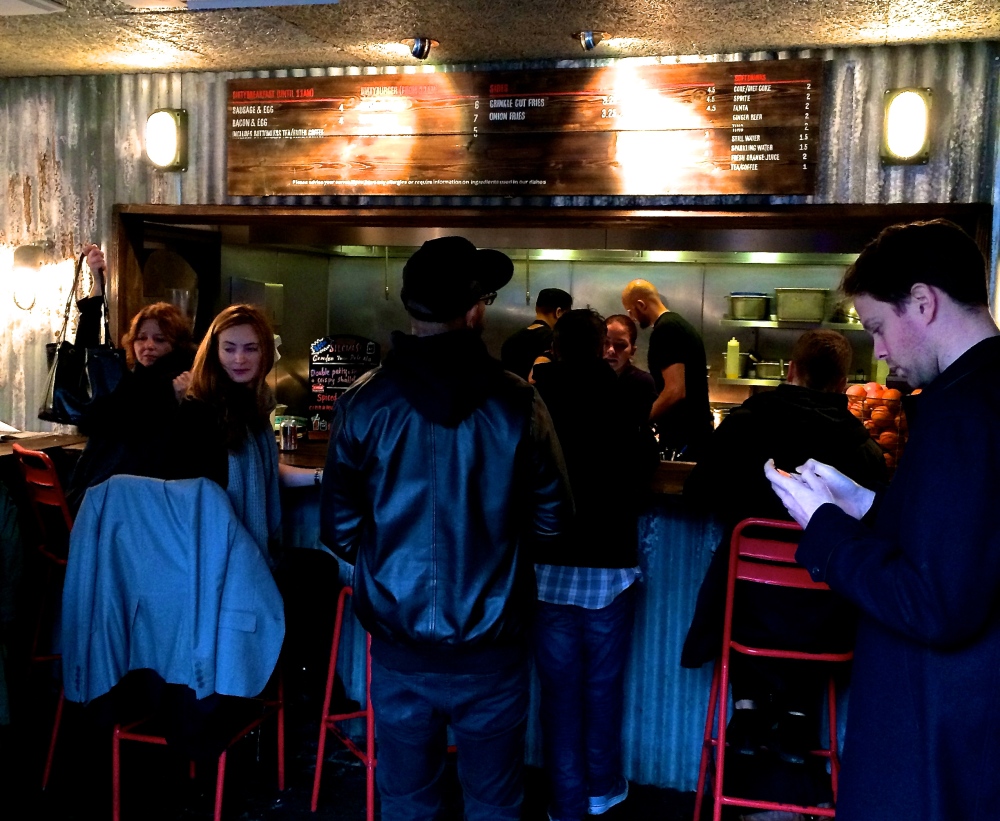 To give an idea of just how short the menu is, Dirty Burger only serves three burgers, of which one is vegetarian.  On the board, the veggie burger held no clues as to what it entailed so I was ordering blind. Unfortunately called the Dirty Cop Out (although I imagine whoever came up with that finds it hilarious) I tried as hard as I could to only refer to is as ‘the veggie burger’. My resistance proved futile, though, as the order was shouted back to the kitchen: ‘One cheeseburger and one Cop Out!’… ha ha. We decided to get one each of the crinkle cut fries and the onion fries – the only two sides availble. 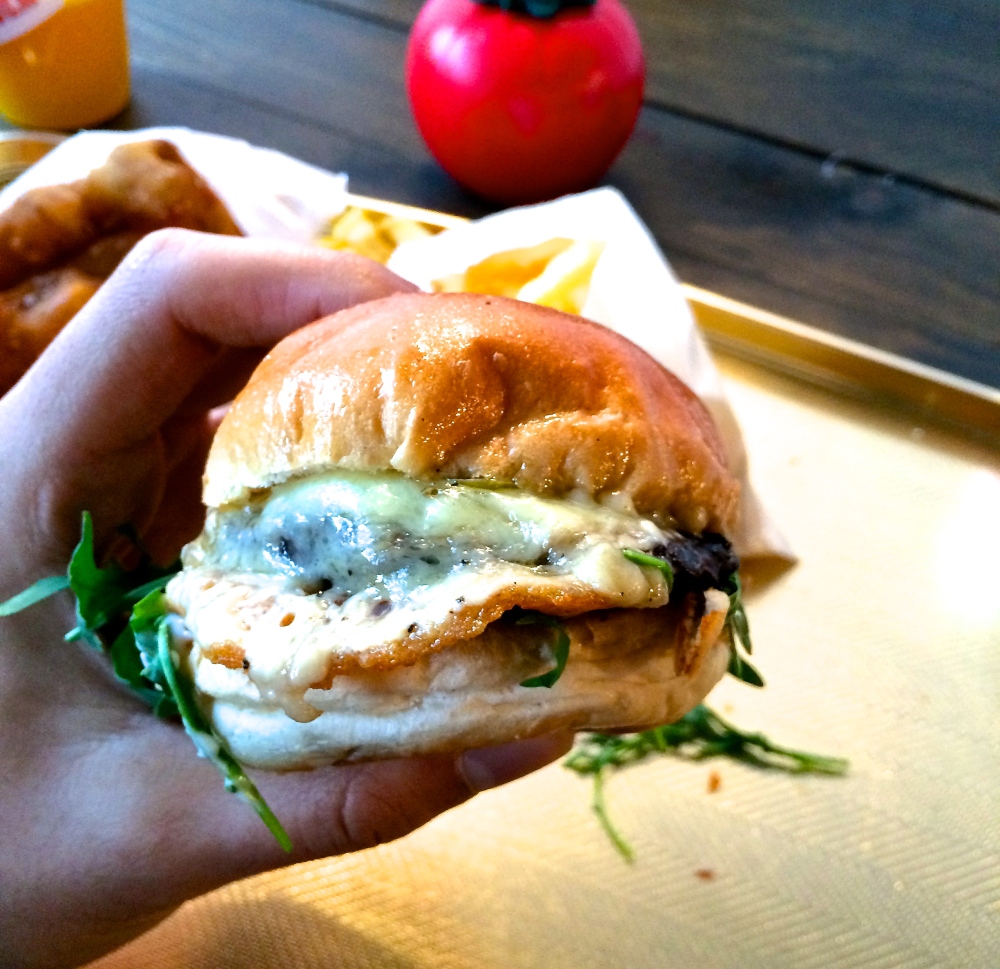 My first impression of the burger itself was that it was smaller that the usual. Also, just by looking at it I still couldn’t tell what it consisted of. The first thing I noticed was a disk of something hard and fried so I thought maybe a fritter, but on closer inspection (and a peak inside) I realise it was a mushroom covered in fried cheese! Taking a bite into it provided a surprisingly large burst of flavour for something so small. The cheese – smoked applewood – had been fried over and around the mushroom and it certainly packed a punch. A few slices of gherkin and a bunch of rocket were thrown in to counter the grease without much success, but the taste of the rocket worked well with the mushroom.

With the richness of the burger meaning I could only eat it at a bite a time before putting it back down, it was almost comical that the portion sizes and nature of the sides were how they were. Both the crinkle cut fries (double fried) and the onion fries (essentially, straight onion rings) were both delicious at first – especially the onion fries, which were made in a light batter and used red, rather than white, onions – but became harder and harder to face as we got through them. Coupled with the fact that my drink was a milkshake off the specials board (spiced apple and cinnamon – recommended), it quickly became one of the most calorific weekday lunches I’ve ever had. 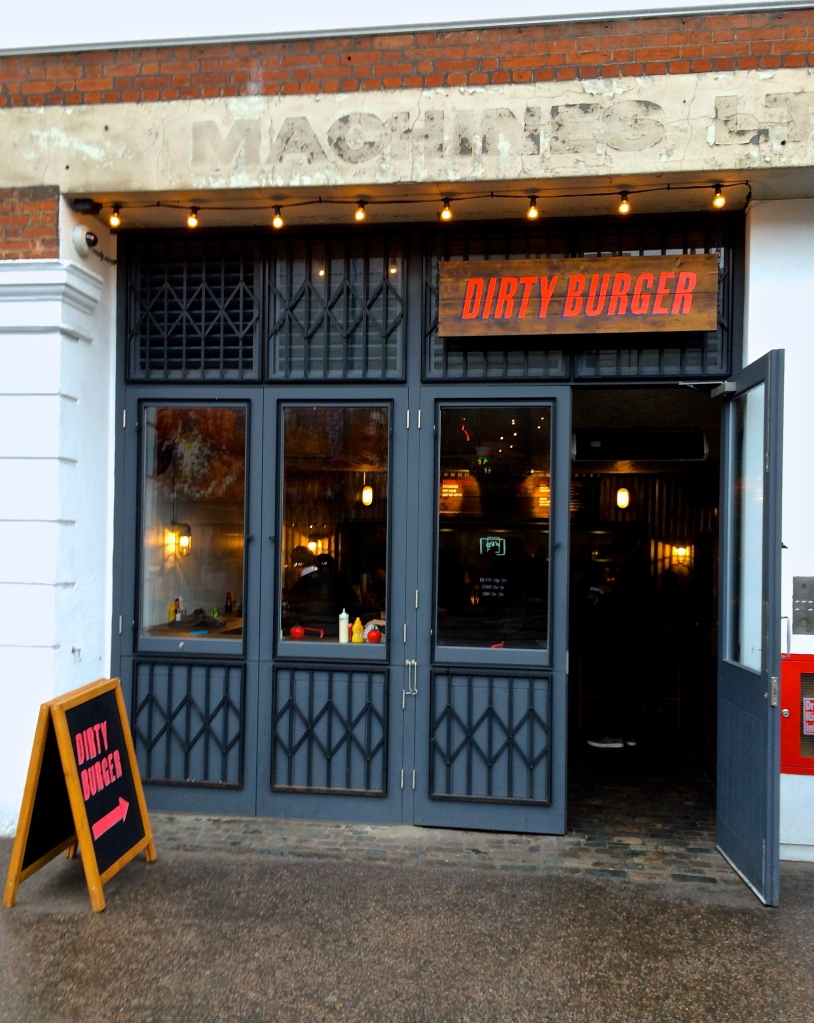 Simple, quick and flavoursome, Dirty Burger wasn’t too far away from what I imagined. However, my overriding memory of the experience was constantly having to grab another one of the many napkins they provided to wipe the grease off my fingers. As a lover of cheese, and to some extent grease, this was even a bit too much for me. I can picture it as the perfect late meal to catch on the way home after some afterwork drinks and the simplicity of the menu, and the layout of the restaurant, lends itself to that. Probably not the best spot for lunch then, especially for my poor little bro craving to catch up on his vitamin deficit whilst on his short break for student living.

As selections for a quick dinner on the move go, the recently renovated Kings Cross station has a few of my absolute favourites. Ignoring the likes of Wasabi and Leon for an quick pre-alcohol stomach-lining dinner – mainly for the sake of this blog – I opted for Giraffe’s fast food restaurant option, Giraffe Stop.

I used to go to Giraffe quite a lot with my family when it first opened up about 15 or so years ago, and the felafel burger has been etched in my memory as an old favourite, and one of those choices one makes before even setting eyes on the menu.

Much to my joy, the felafel burger was still on the menu, called the ‘Felafel Deluxe’, so I duly ordered it. The Giraffe Stop has a sign outside it promoting ‘Fabulous Burgers!’ and have a whopping 9 variations on the menu. However, the Felafel Deluxe was the only veggie one (there’s a fish finger burger on the menu, as well, for those that way inclined) so not much deliberation was needed, which is never normally the case anyway. 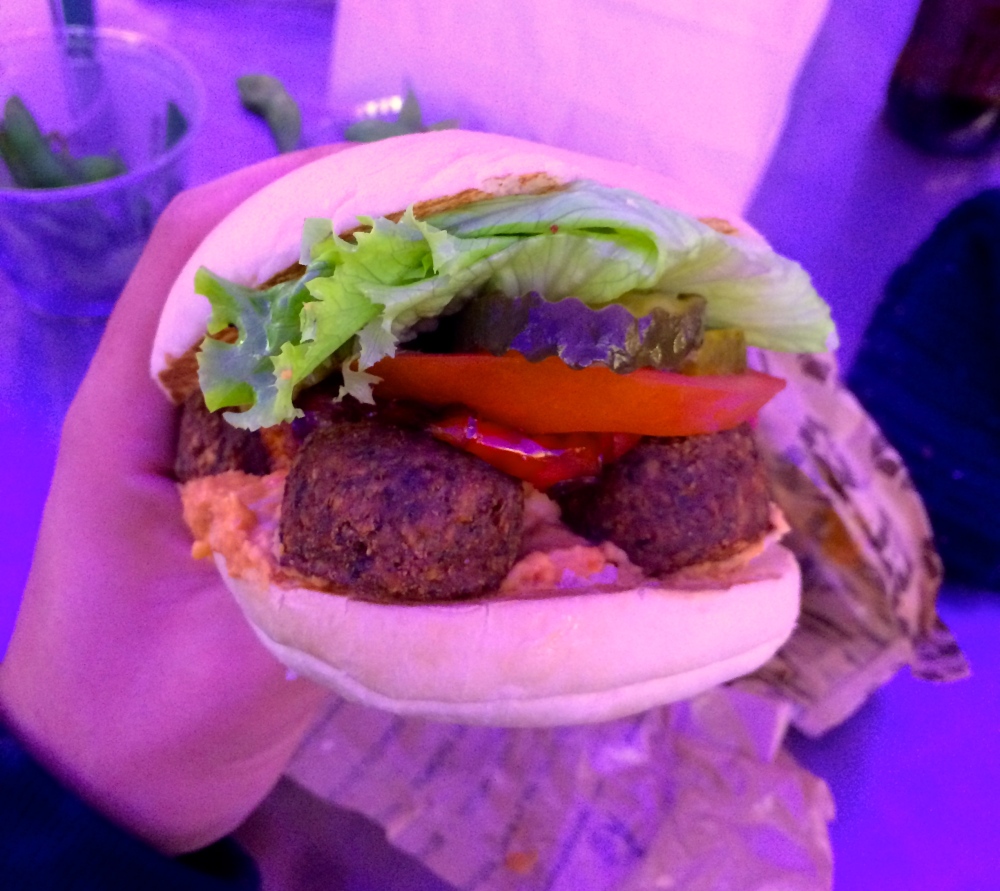 I’ll hold my hand up here, I fucking love felafel – I’ve probably had more felafel than veggie burgers in my time – so I’d like to say that I know a thing or two about them. The flavour and taste of these were unfortunately rather bland and fell into the all-to-regular trap of being quite dry. What was odd as well – and different to the heavenly Giraffe felafel burger of those halcyon days – is that instead of a felafel-formed patty inside the Felafel Deluxe they use individual felafel, which in my eyes defeats the point in having it as a burger in the first place. Needless to say, a fair few soldiers were lost in the journey from bun to mouth.

The rest of the burger itself was a pleasant surprise, aside from the bun, and the red pepper hummus particularly worked well with the felafel. A welcome and unexpected treat (I didn’t full read the menu) was the halloumi which added some much needed saltiness to the burger. The dill-infused pickle also burst with flavour.

To wash it down I got a bottle of the Peruvian beer Cusqueña – a pilsner-type lager similar to mexican beers like Pacifico and Modelo – which went down a treat under the eerie, blue Kings Cross lighting.

Food and drink aside, with Giraffe Stop being a majority take away restaurant I didn’t expect the best of service, but I felt the guy who served me was strangely robotic to the extent of being rude, and my burger was served in a take away wrapper, rather than a burger basket, even though I told them I was sitting outside.

All in all though, it was a fairly pleasant burger, but I don’t think I’ll be going out of my way to eat here again, especially when a Wasabi tofu curry is waiting for me next door.

What better place to start than in my own back yard?

Bun & Bar has been open since the end of August and is one of the latest additions to the Harringay wave of gentrification along Green Lanes. With Live music there on weekend evenings and a generally cool vibe otherwise, it’s quite an enjoyable place to wile away a couple of hours enjoying a few cocktails to go with your burger. It’s a quite a laid back establishment and you have to order at the bar but this adds to the relaxed mood. 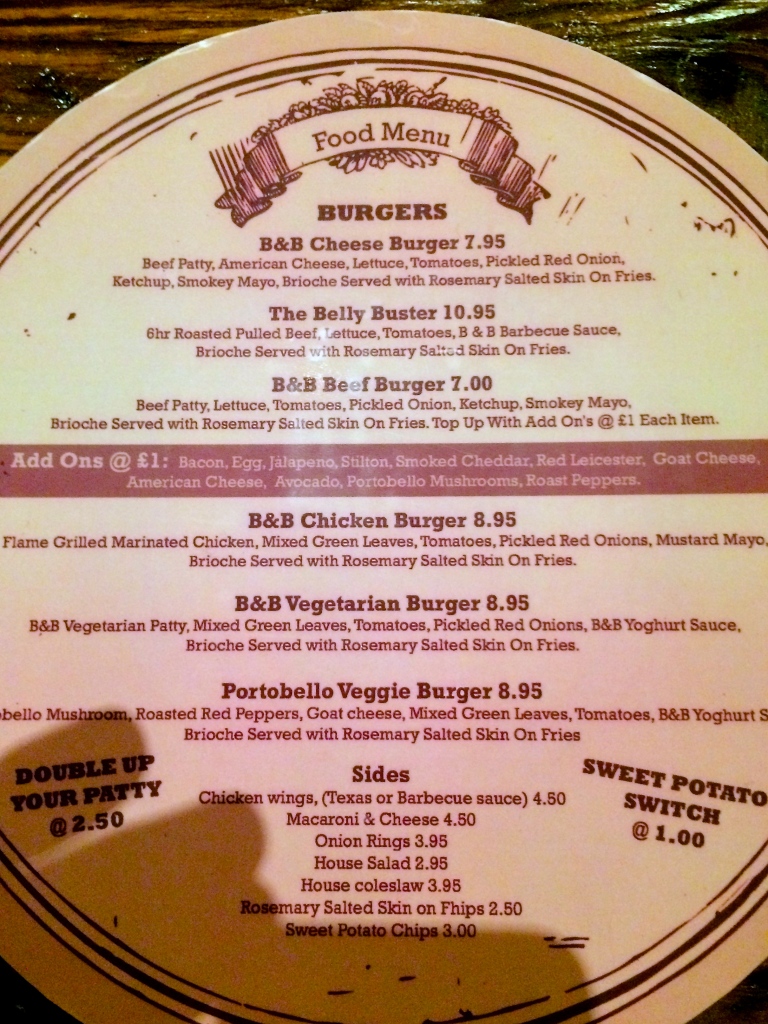 Amazingly, and almost unheard of in the burger restaurant world, Bun & Bar’s burger menu is 1/3 (ONE THIRD) vegetarian. Having sampled the B&B Vegetarian Burger before (which is delicious – especially with a bit of added stilton) I decided to go try the Portobello Veggie Burger.

I’m usually not a fan of a ‘shroom burger as I feel it’s a bit of a cop out for a burger chef who doesn’t want to try their hand at creating a truly tasty veggie patty. As the aforementioned B&B Vegetarian Burger proves, this is not a problem at Bun & Bar so I put my gripe behind me and got stuck in.

Inside a brioche bun (why change a classic?) the portobello mushroom is served with a large roasted pepper, big slab of goats cheese and B&B yogurt sauce. The mushroom itself was big, juicy and full of flavour, whilst the richness of the goats cheese was counteracted by the pepper and yogurt for a very pleasant overall veggie burger experience.

At Bun & Bar the price of the burger ( < £10 ) includes rosemary fries but you can upgrade to sweet potato fries for only a quid more (although I had to ask for my gherkin!). They have a small but appetising selection of sides – one of which is a so far untried by me, yet delicious looking, slab of mac n cheese. I didn’t go for a cocktail this time but instead opted for a pint of the Crate Pale Ale – an American style, hoppy pale ale, brewed in London – which accompanied the burger perfectly.

For a new business, out in the relative sticks, Bun & Bar is fairly busy most nights and I can see why: affordable, great burgers and a friendly atmosphere. This wasn’t my first time here, and it certainly won’t be the last!